NEW PEUGEOT 3008: THE ELEGANT SUV WITH THE LATEST TECHNOLOGY.

Discover the new PEUGEOT 3008 and its unique revolutionary style. The sleek PEUGEOT 3008 combines technology with elegance to display strength and character. The unrivalled PEUGEOT i-Cockpit® as well as the range of innovative technologies deployed on board have been designed to enhance your well-being and safety. The new PEUGEOT 3008 is available in a choice of PLUG-IN HYBRID and PETROL engines.
FRAMELESS RADIATOR GRILLE 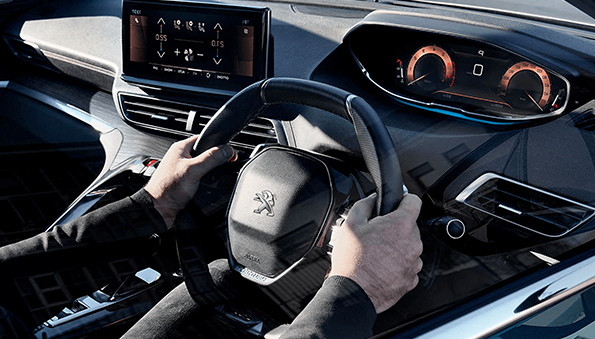 With the PEUGEOT top-of-the-range ergonomic driving position upgraded i-Cockpit®, the driving experience on board the new PEUGEOT 3008 becomes simple and intuitive, under enhanced comfort and safety conditions.

Its configurable high-quality head-up digital display panel, which can be easily customised, means you don’t take your eyes off the road.

On the plug-in hybrid version, the PEUGEOT i-Cockpit® incorporates a fully dedicated display that allows you to view specific driving information on the instrument panel in your field of vision (driving mode, powertrain energy flows, battery level status and electric range remaining) and on the touchscreen, energy consumption statistics (electric and fuel).

The latest-generation driving aids of the new PEUGEOT 3008 further enhance on-board comfort and safety and assist you towards autonomous driving.

Whether they detect the road signs (Extended Road Sign Recognition), and assist you in the traffic flow (Drive Assist Plus Pack, “ACC” Adaptive Cruise Control with Stop & Go function with Lane Keeping Assistance), or through analysing your environment (Blind Spot Detection), these assistance systems are designed to offer peace-of-mind driving.